A brand for a band

Building a classical music duo brand and image from scratch.

Jâca is a clarinet and guitar duo that tours internationally playing a blend of classical and world music. The two members of this group, Jaxon Williams and Wesley Ferreira have diverse family backgrounds (Portuguese and Spanish) and they wanted to share that with their audience by moving beyond genre into new but familiar musical territory. Since a guitar/clarinet duo is uncommon, they primarily arrange and write their own music, which makes them both modern and unique.

The duo began performing mostly Portuguese music, and the genesis of the duo came from collaborating on a new piece of Portuguese music called “Imaginary Beings”. This was a point of inflection for the group trajectory so they wanted it to be present in the process of building their image. As a result, Portuguese influence is present in various aspects of their branding. For example, their group name, “Jâca”, comes from the Portuguese word for Jackfruit. The duo chose this name because the jackfruit is used in many different cuisines and palettes; symbolic of what they aim to do with music.

Knowing the history of the group, I set up a planning meeting with both members of the duo to discuss their goals and what they wanted to communicate through their image.

As a newer group and rising presence in the chamber music scene, Jâca was looking to do a complete branding and press kit package that would give them a timeless and professional look while simultaneously giving them a modern edge to set them apart from the other classical music groups in their sphere.
‍
These are some of the concepts we came up with:
‍

My first goal was to connect what Jâca is with what Jâca wants to communicate so we could determine the style guides to create their brand.

Before starting the creative process I asked them an important question that would determine the direction the design of the brand would take. How would the brand be used in the future?

Jâca had also expressed a desire to add in an online store feature where they could sell merchandise for the group and for a cultural exchange program they founded. This meant the brand would need a powerful icon that could be used independently from the logo and vice versa. More versions of the logo would mean more variety for Jâca merchandise.

Having studied the client background and its needs, I decided to start the creative process by focusing on the following concepts:
‍
‍
Majestic
International
Imaginary
Beings
Portuguese

These concepts brought me to try different animal shapes that could express majesty but modifying them a little so they would have a feeling of imaginary beings or creatures. 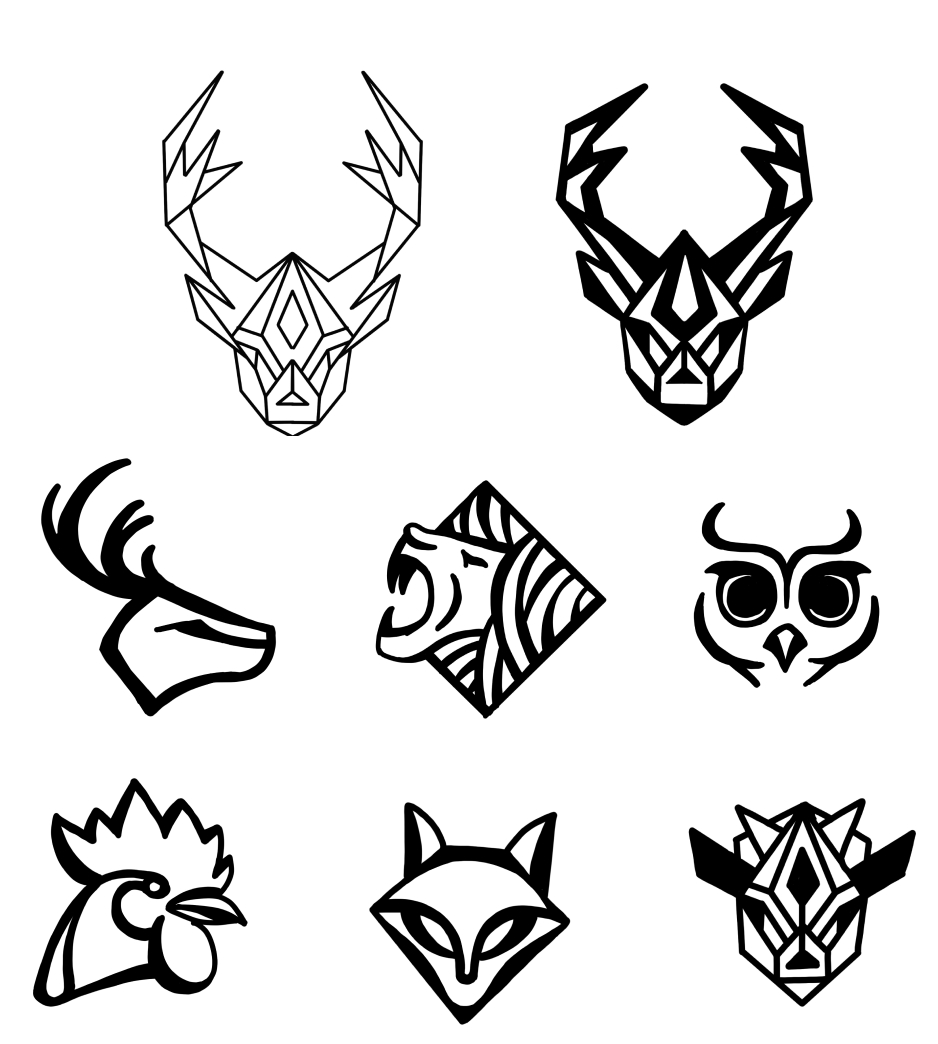 During this creative process I continued researching Portuguese culture and discovered that Portugal is known for having a rooster as a symbol of good luck. This symbol is widely known throughout the country and is one of the most popular souvenir items from the country as it is thought to represent Portugal. 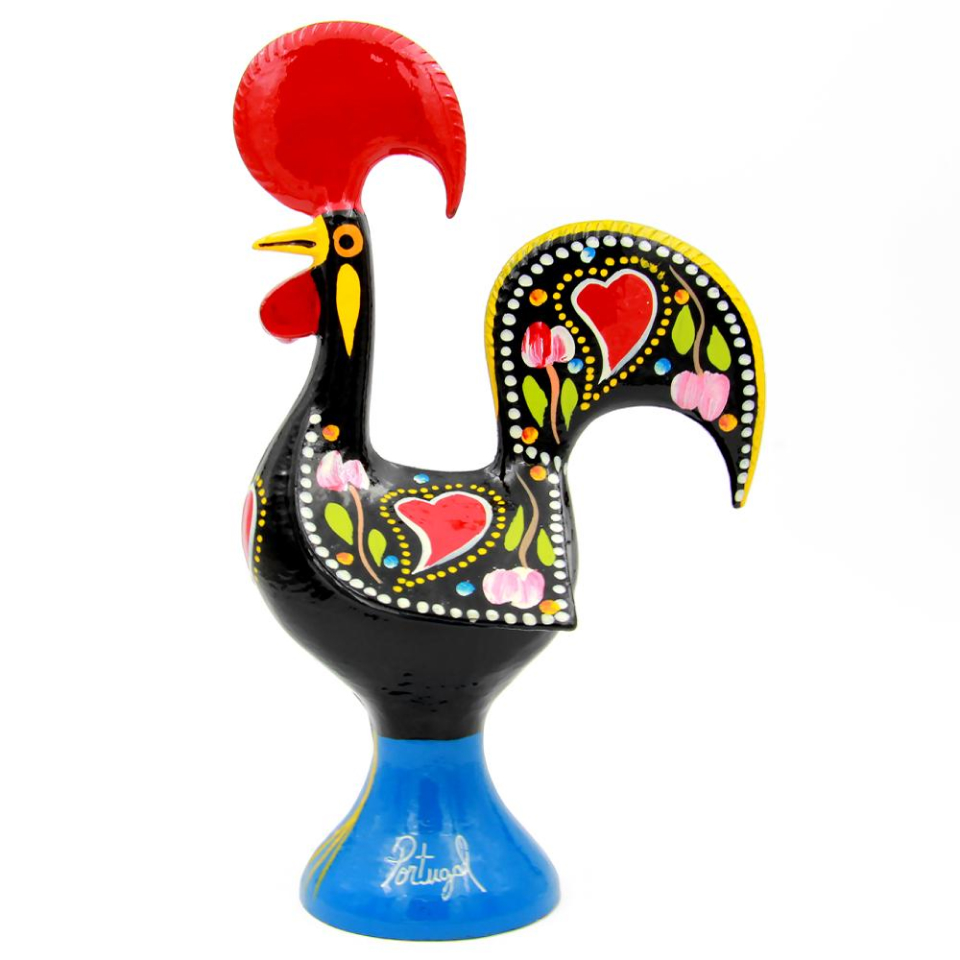 Playing with this iconic symbol and the idea of an imaginary being, I came out with these drafts: 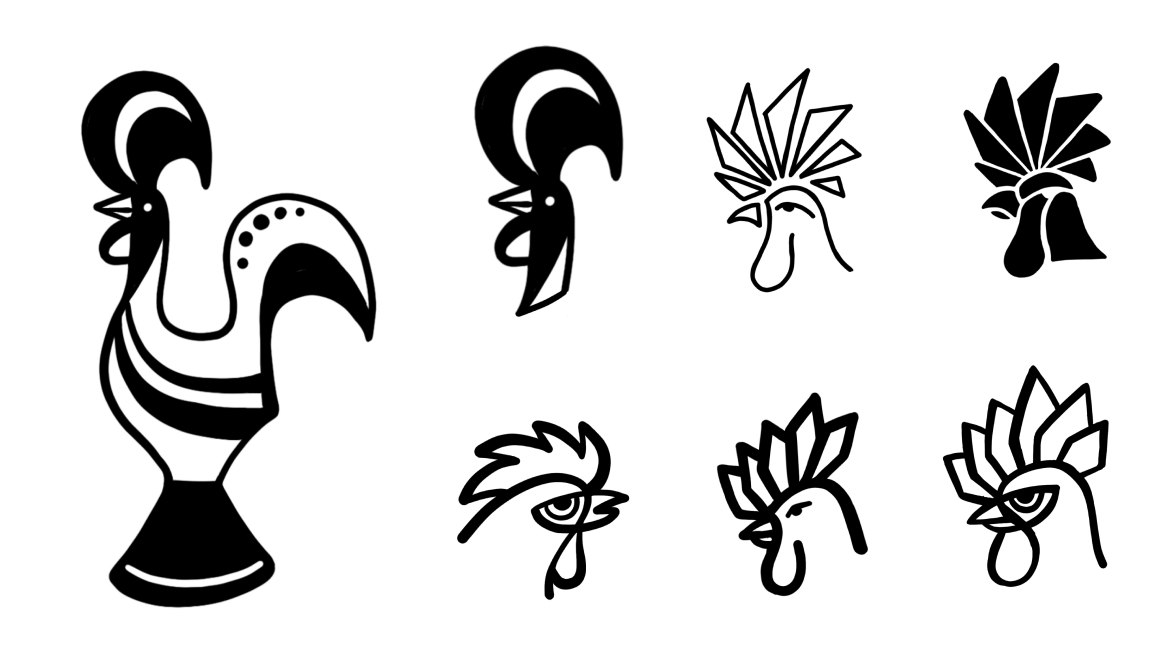 After these initial drafts, I made a transition to vectors and start playing around with these ideas:

We finally had an icon Jâca identified with: A rooster that symbolized the duo's Portuguese roots with a touch of "imaginary being". Now we needed to find the right typography for the logo. Since we decided to focus on the icon first, the logo would have to match it. Here are some of my initial draft ideas: 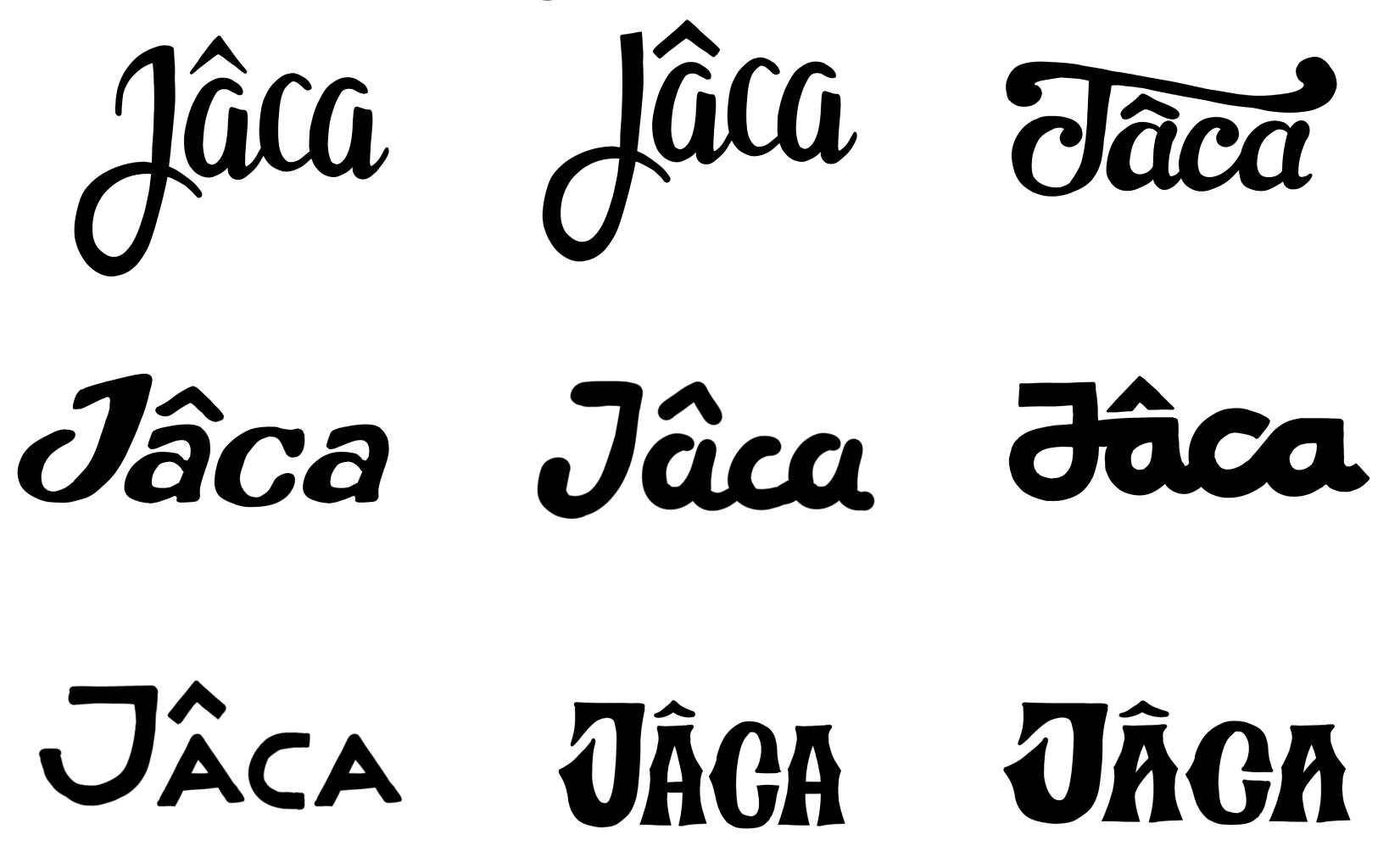 Since the icon was already quite strong, we didn’t want the logo to be overbearing. At the same time, it would have to have enough character to be used by itself without needing the icon. Thus, I discarded all script, serif, and display fonts, and focused exclusively on sans serif and lowercase letters. 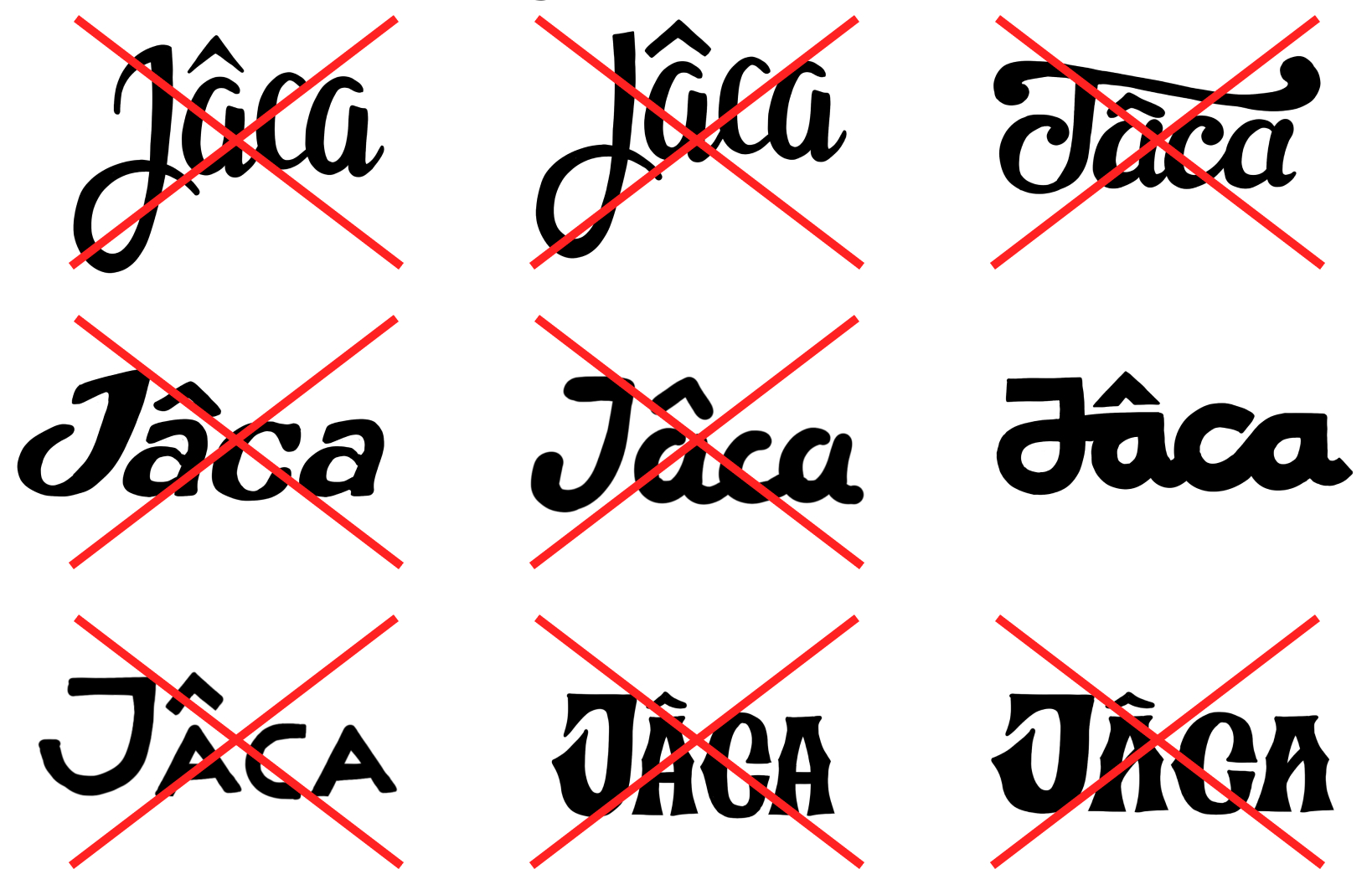 Now that we knew which type of font would best fit the icon, I looked for different sans serif typographies as inspiration to create the right letters for Jâca’s logo. In order to get to the right one, I made various iterations of the logo, changing small details until arriving at a final product.

A circumflex symbol was added to the letter “a” to add an exotic flare, hinting at the international and world music ties of the group, who lean heavily on both Portuguese and Spanish traditional folk music.


Color & Versions
‍
Gold and black were selected as the main colors of the brand, denoting elegance, majesty, prestige (all values that were explicitly requested by the duo to be present in the brand). These primary colors will be combined with white and different grays for different applications such as the website, newsletters, corporate documents, etc.

In order to build the website and a solid press kit Jâca needed some visual content to get started with.
They wanted to have a wide variety of photos with different outfits and poses reflecting both the classical and the modern world, elegant, but fun at the same time having in mind the values previously mentioned. 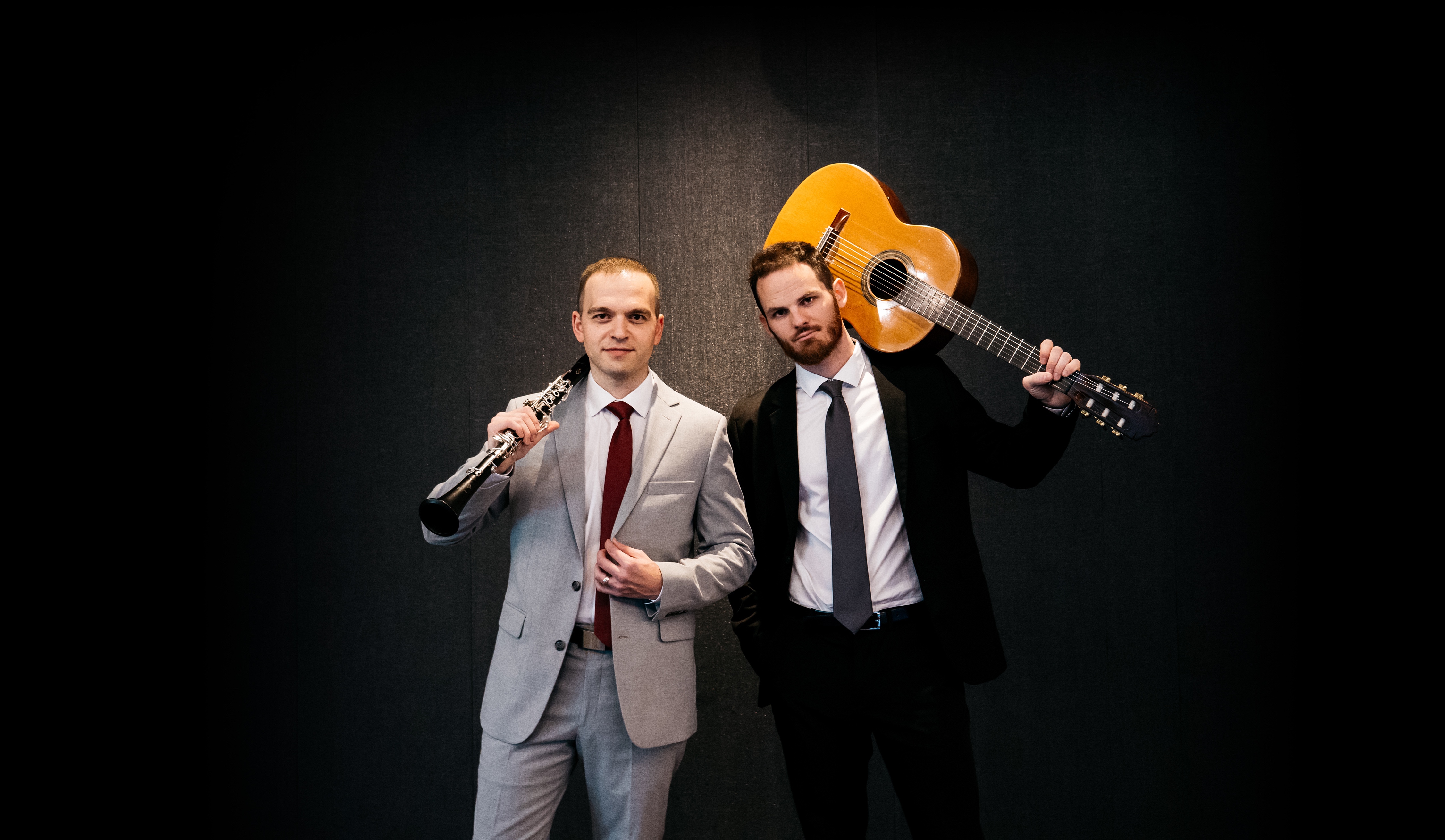 Jâca had three pieces of music they wanted to have as videos on their press kit. For the videos, we chose different scenes that would fit with the style of each song and that would transmit the vibe they were looking for. Classical music is often heady and difficult to engage with for the uninitiated. Jâca’s repertoire, however, prioritizes being pleasant and fun. Thus, in filming, I chose to use moving shots and close-ups of their instruments to visually engage the listener.

Having Jâca’s image defined and visual content to work with, the process of designing the website was much more fluid. I decided to make the site very visual, and where you could tell what it was about at first look. Jâca had a very clear picture of what the content of the website would be like, so I built a sitemap based on their input and created drafts of three pages that would guide the functionality of the rest of the website. 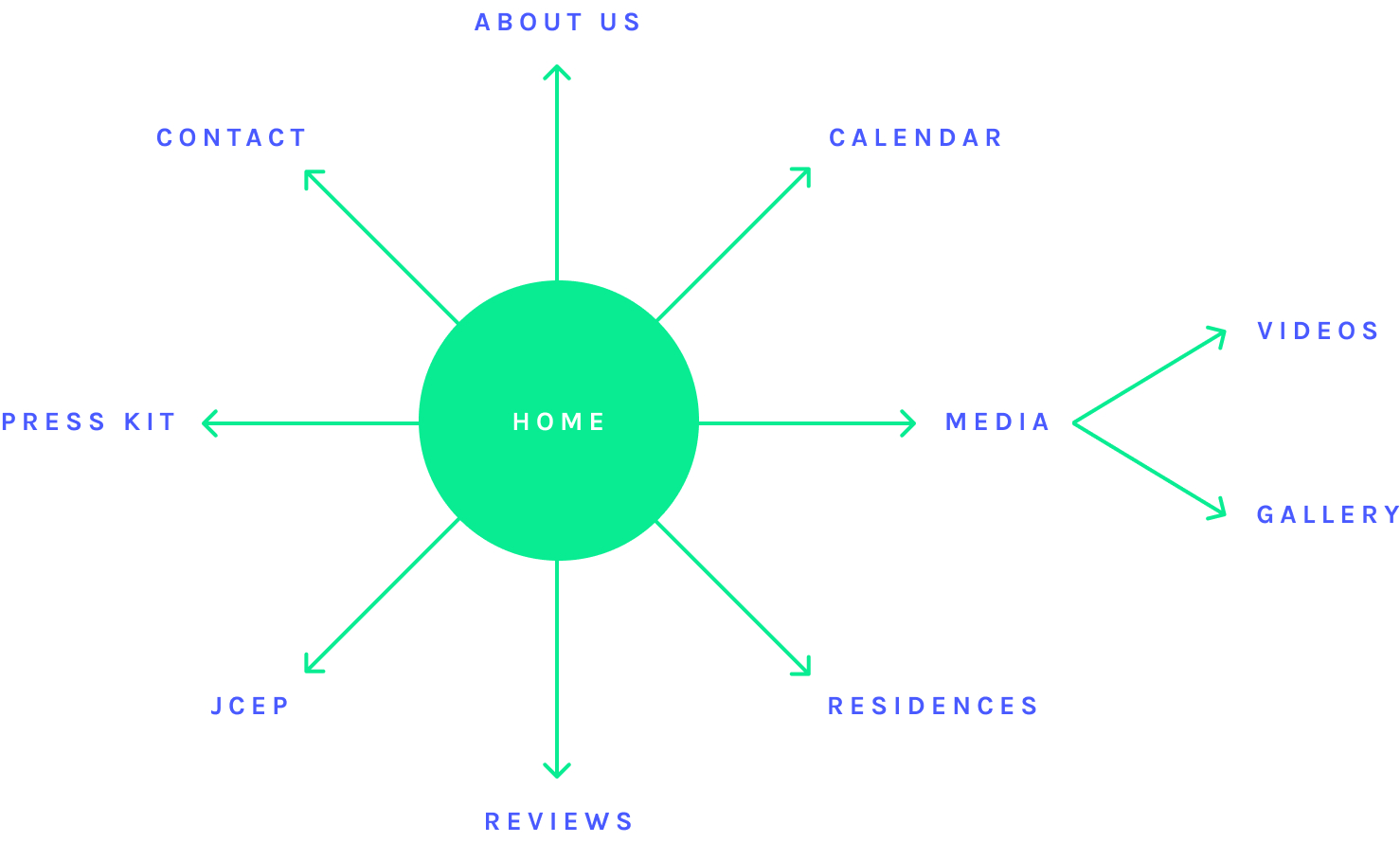 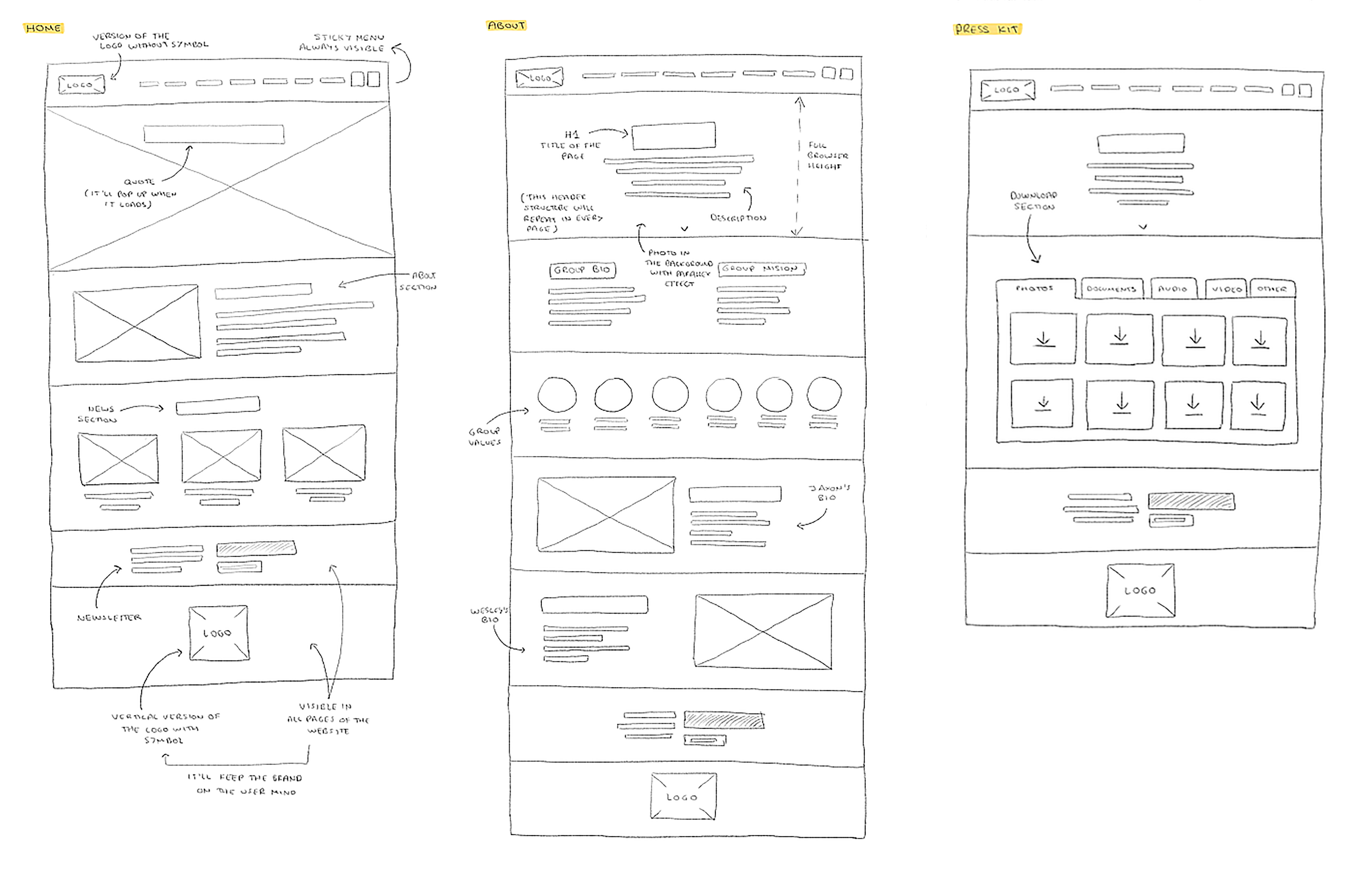 The website was built in Wordpress with key features such as a downloadable press kit section, media galleries, forms, and motion elements as user scroll through the site. I believe an interactive page makes the user experience much more pleasant and memorable. 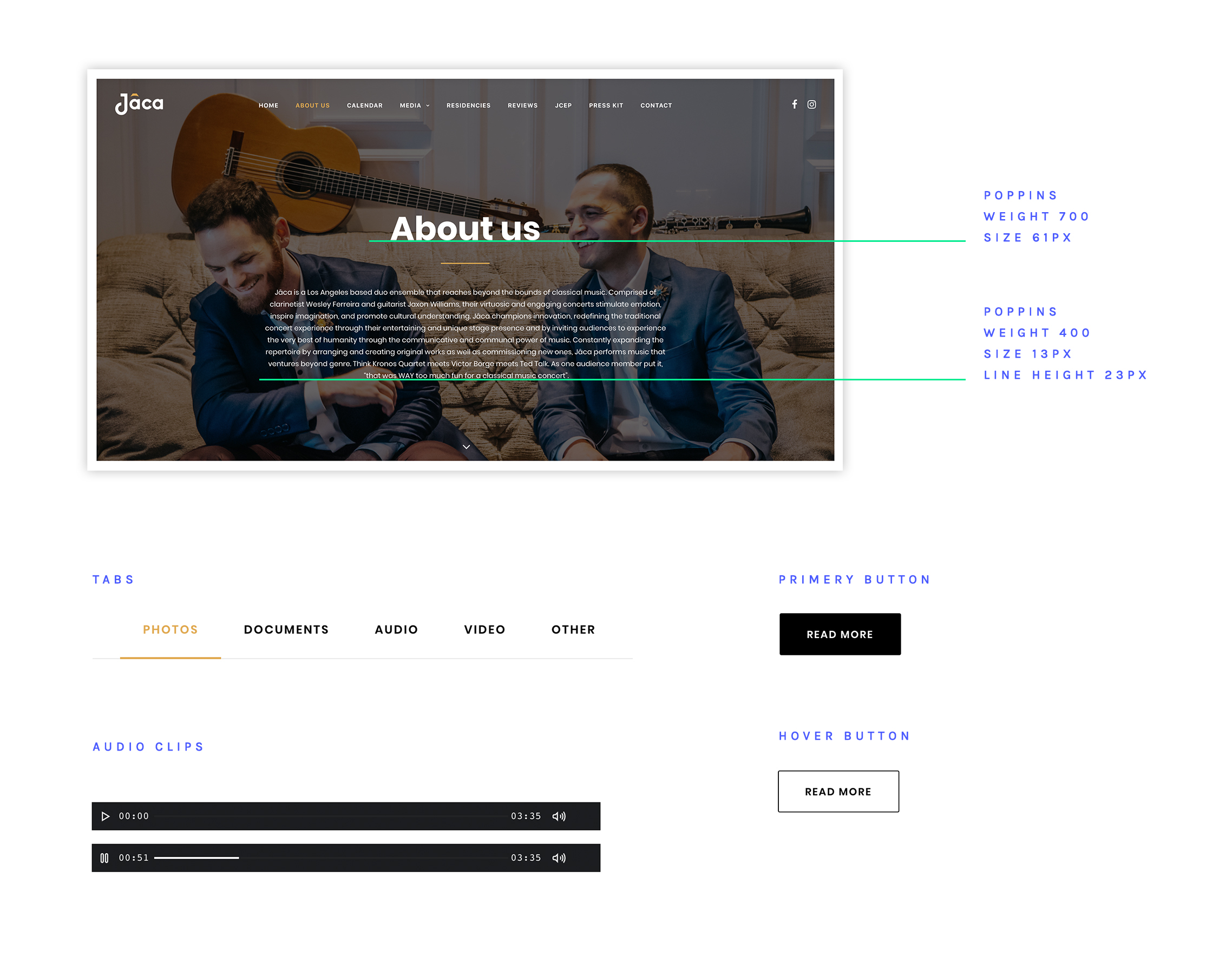 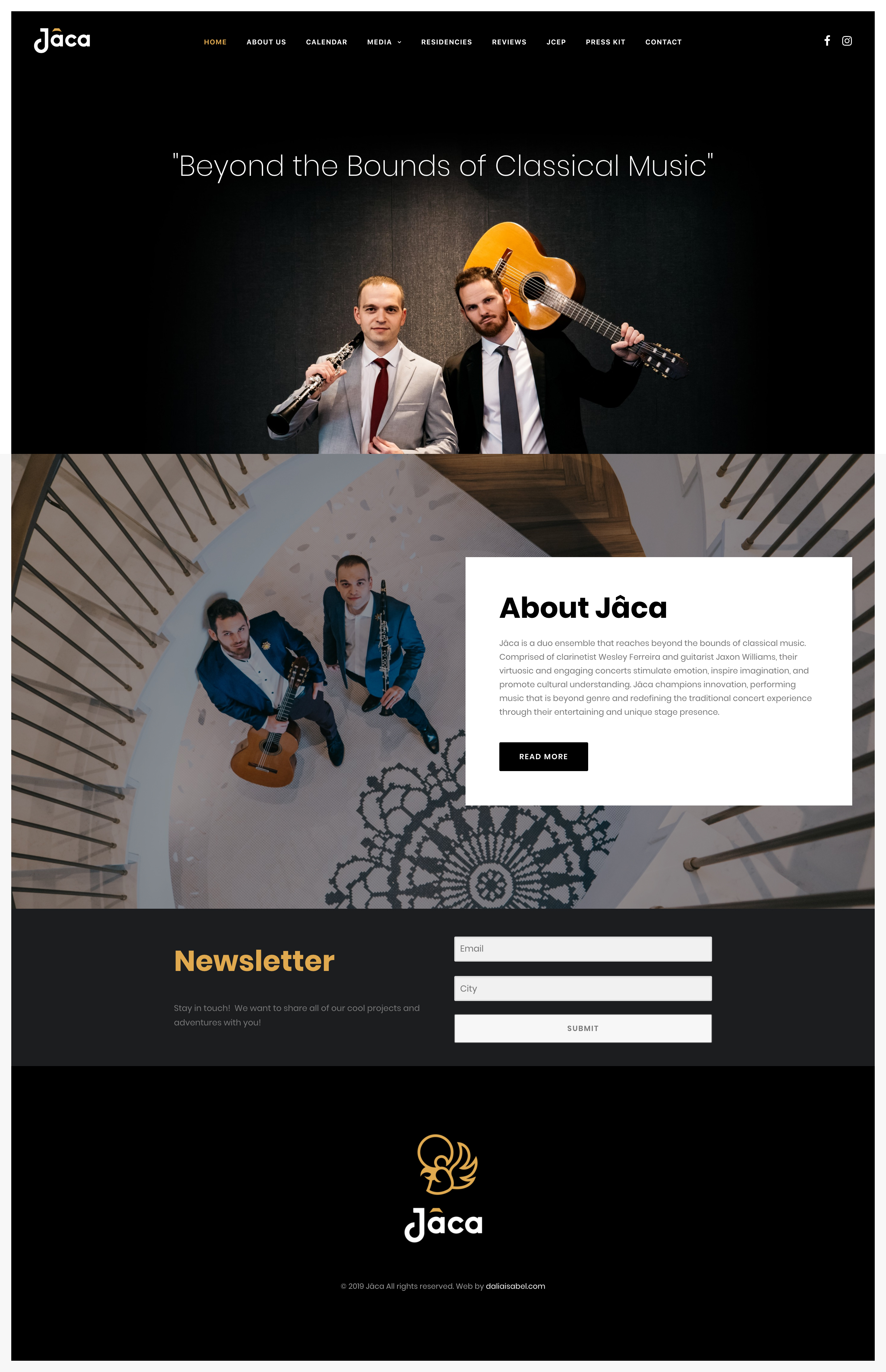 The Jâca store was designed and developed to sell both Jâca merchandise and products from their cultural exchange program. Cultural Exchange products were marked with a red sticker and billed as different items than merchandise. 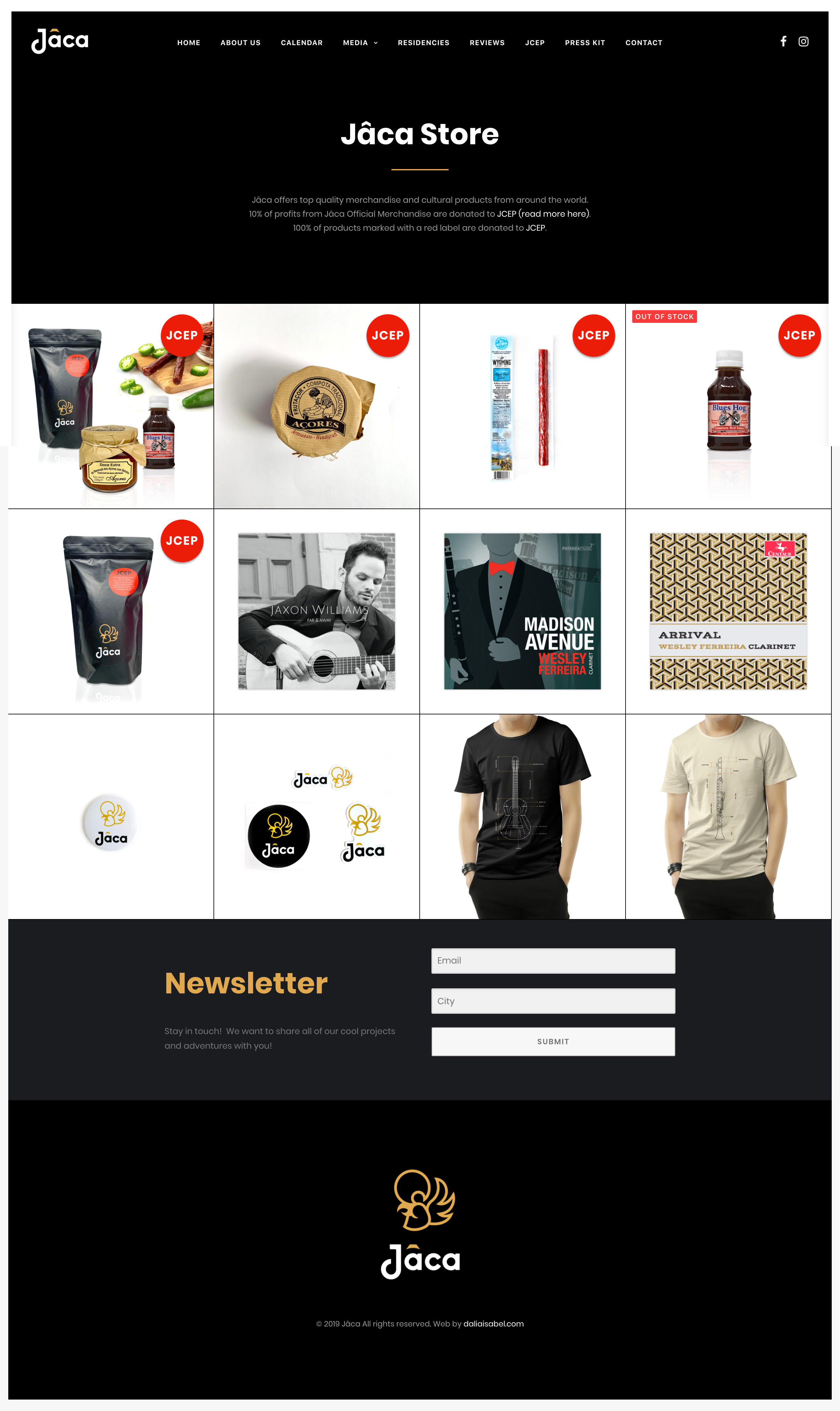 Jâca wanted to be different and have unique merchandise that their audience would actually be exited to use vs the typical branded item.
Most of their fans are themselves musicians or aficionados, so I created a technical blueprint-style design of each of their instruments that could be sold as a graphic T-shirt with the duo's logo on the back. This product really resonated with their target demographic. 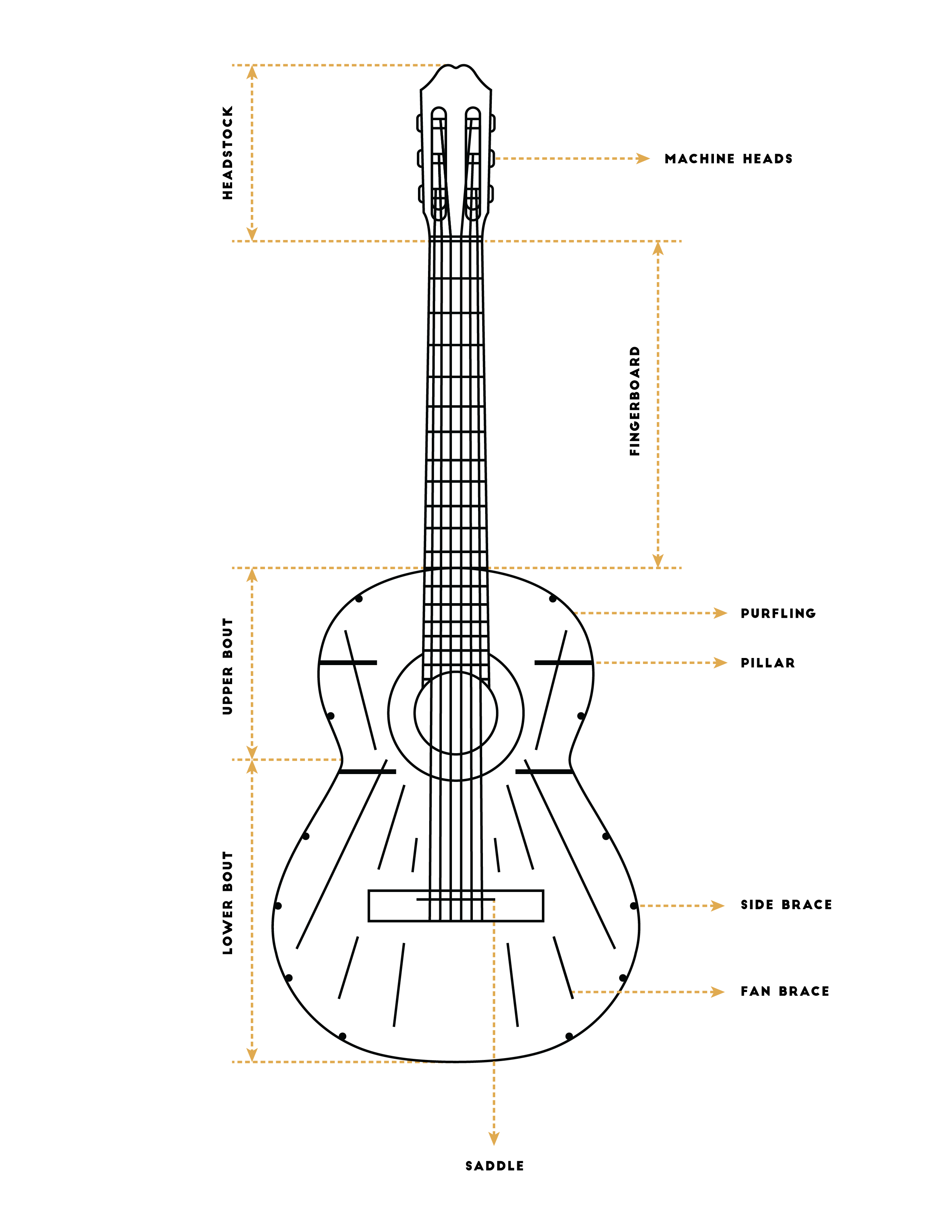 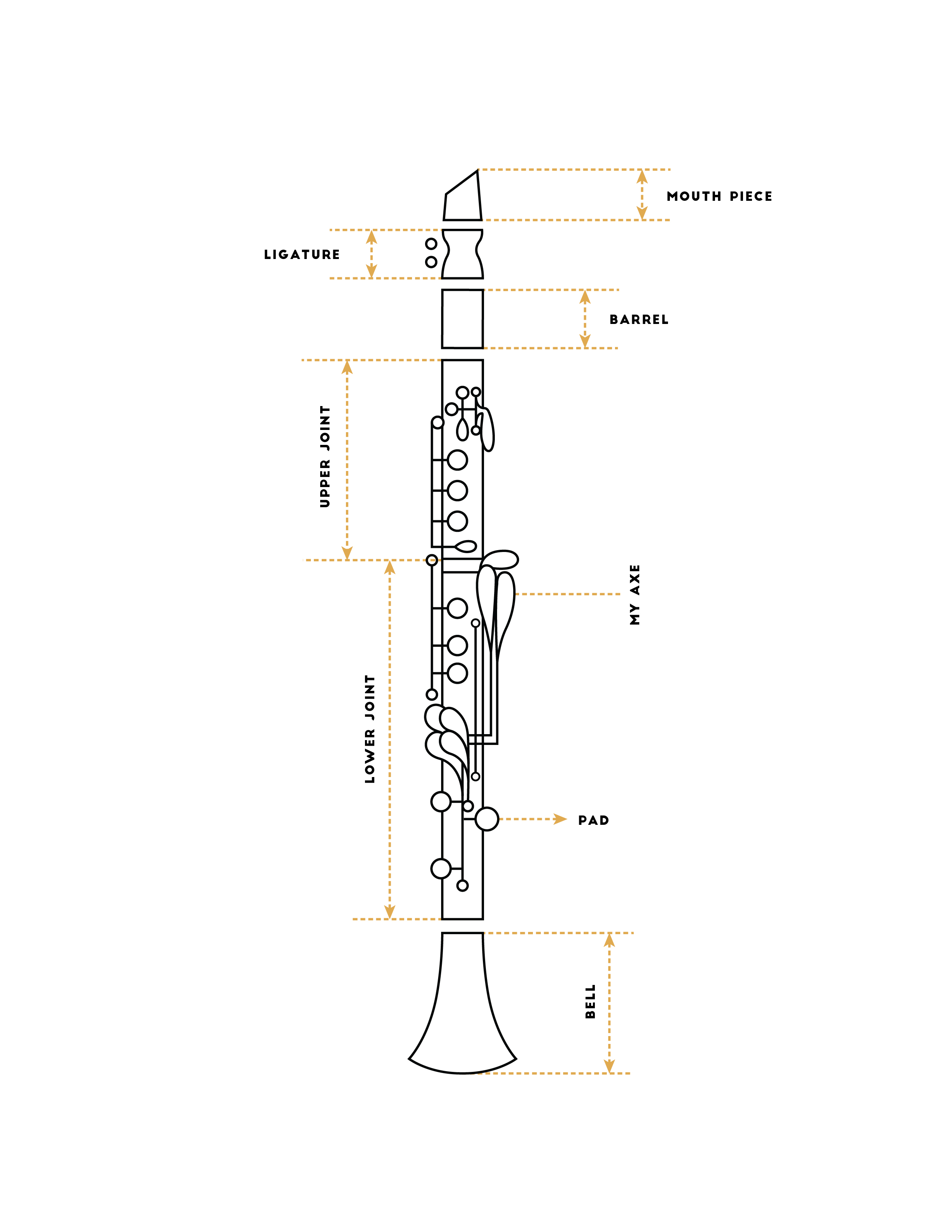 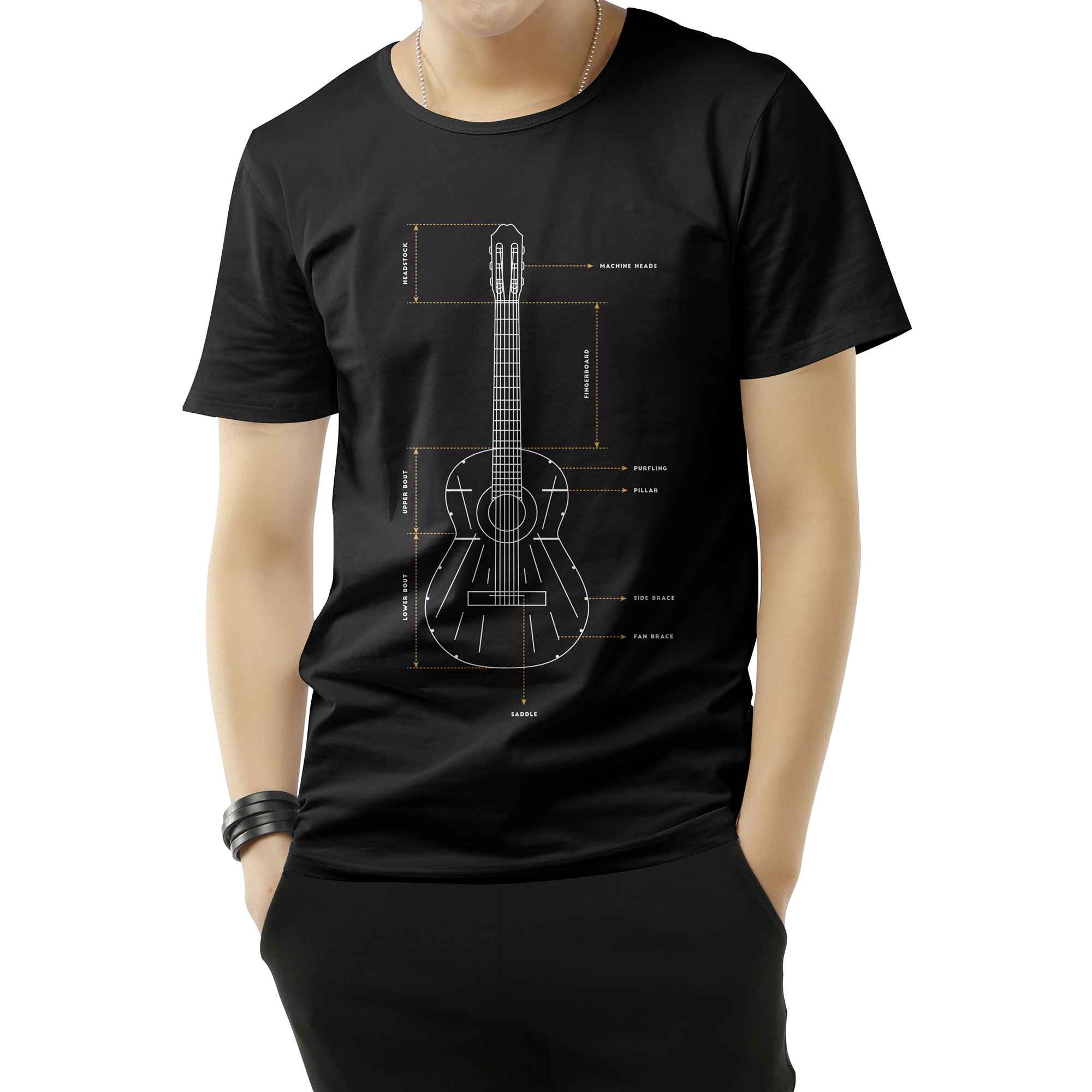 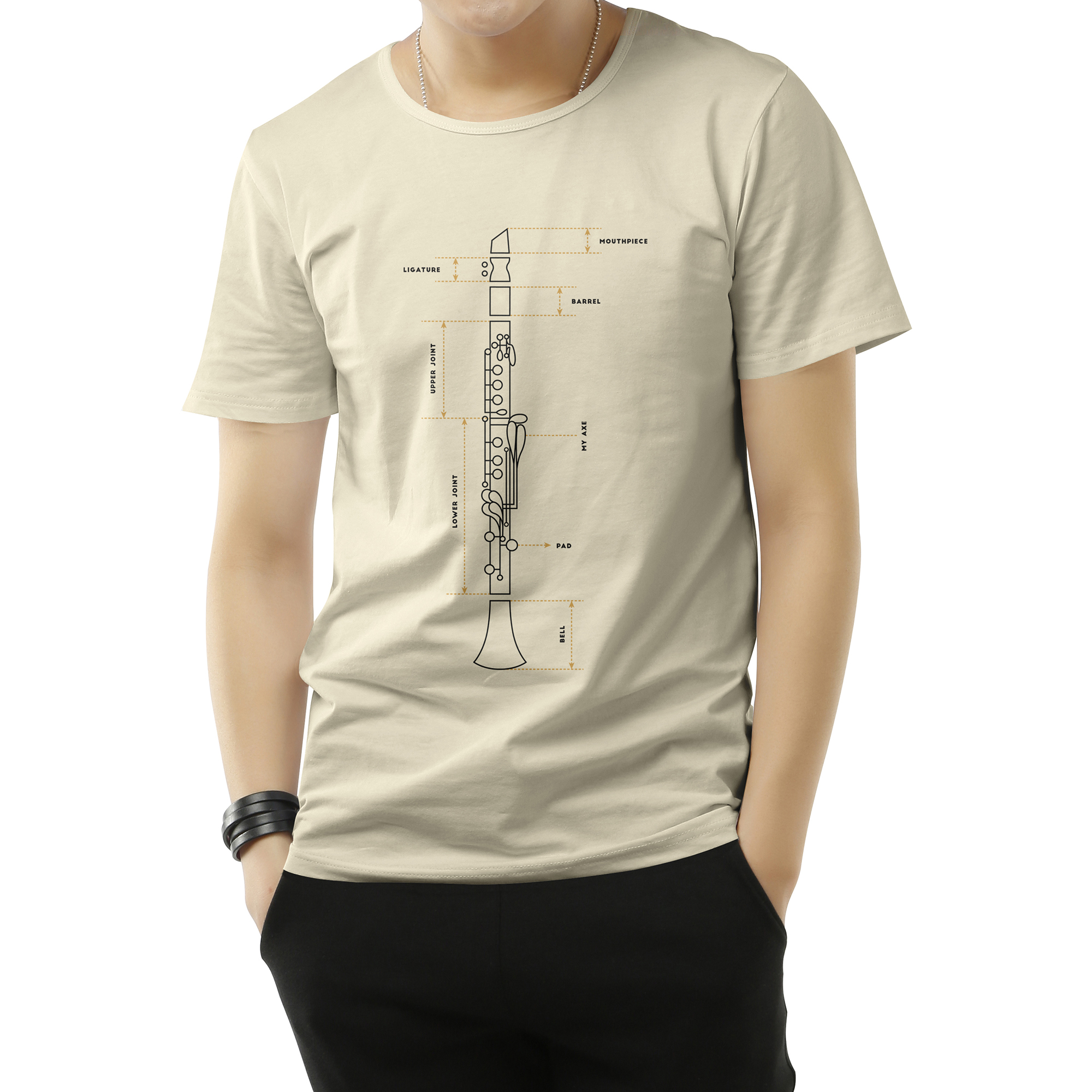